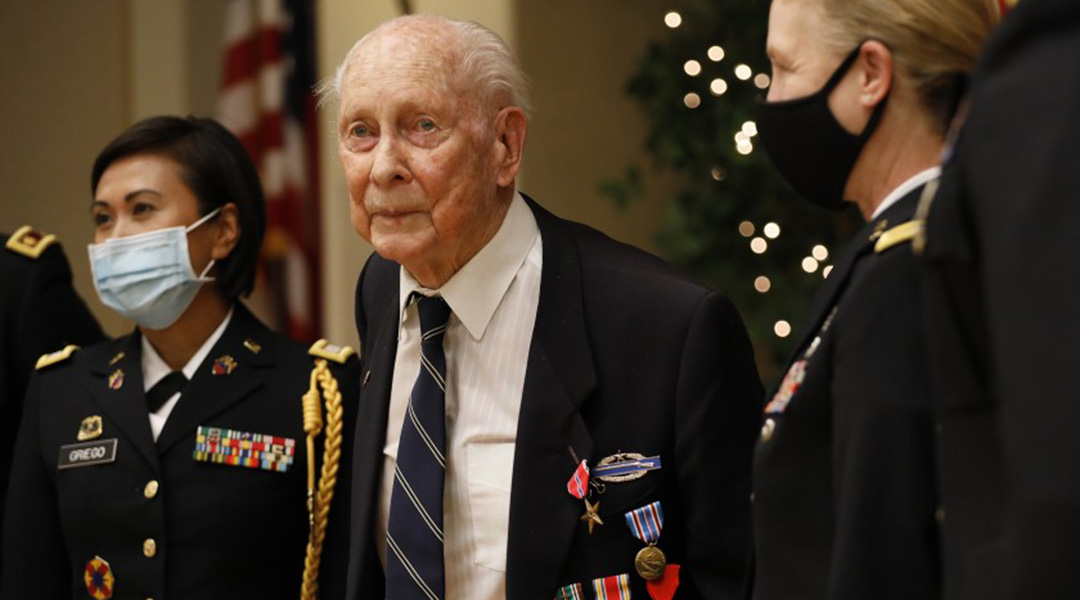 When you ask professor Eldon L. Knuth about his time served in the 95th Infantry Division in World War II, he chronicles the firsthand battle for the fortress in Metz in eastern France. It was November 1944; he was one of 30 soldiers trapped behind enemy lines for five days in severe winter weather with meager supplies and suffering from trench foot. During those critical five days, Knuth survived with only D-ration bars (military chocolate bars) to eat. Although many men were lost in the initial attack, and despite being within view of the fort, the trapped group suffered only one death during this holding period. On the fifth day, friendly troops broke through the German line and came to their rescue.

Seventy-six years after this battle, Pfc. Knuth received the Bronze Star Medal for meritorious achievement. The medal ceremony took place on Tuesday, Sept. 29, at 3 p.m. at University Village Thousand Oaks, where Knuth and his wife, Margaret, reside. Several members of his immediate family also attended to watch as the Army’s first woman to command a U.S. Army infantry division, Maj. Gen. Laura Yeager, presented him with the medal.

“I appreciate the U.S. Army recognizing me for my service to my country,” said Knuth. “I can say I’m proud to be a member of The Iron Men of Metz.”

Due to COVID-19 restrictions, University Village only allowed a select number of people to attend the ceremony. However, the community broadcast the event live through the community TV station, so Knuth’s neighbors could watch the event.

“It’s so important that we honor these World War II veterans,” said the master of ceremonies Lt. Col. Robert Johnson. “They sacrificed so much, and it’s an honor to give back to those who’ve given so much.”

Along with the Bronze Star Medal, Knuth has been awarded significant other decorations, including the European-African-Middle Eastern Campaign Medal with two battle stars, the World War II Victory Medal, and two awards of the Combat Infantryman Badge. In 2019, he was awarded the French Legion of Honor Medal with the rank of chevalier (knight) for his service in France.

After being discharged from the Army in August 1945, Knuth spent 35 years on the faculty of the UCLA School of Engineering and Applied Science. He still attends annual reunions with his fellow combat veterans and has attended liberation anniversary celebrations in Metz five times since the 50th anniversary in 1994.

The 95-year-old Knuth and his 94-year-old wife remain active at their University Village home. He swims five days a week, and they go to the on-site fitness center three times a week.

Read more about the event and Knuth’s heroic story in the Los Angeles Times.

Send Me an Info Packet

Stay in the Loop